Commissioned by Kool Automation, a robot setup has been developed with three different vacuum grippers, with which the cutting of stainless steel plates for sinks is automated. The plates that need to be cut vary significantly in size: the smallest plate is 630x555mm and the largest 1300x970mm. With the different grippers it is possible to pick up the plates within this range from a stack and cut them under the cutting bench. The robot is equipped with an automatic changing system, with which the robot itself can pick up and take off the various grippers in the exchange station.

Picking up a new plate

The plates are stacked on a pallet, from where a new plate has to be picked up each time. The so-called ‘peelgripper’ is a vacuum gripper with six suction cups, which can be adjusted for the right size plates. Since the plates are 0.6mm thick, they stick together if they are picked up in a normal way. That is why there is an air cylinder on two corners of the gripper. This allows the corners to be bent slightly first, so an air film comes under the top plate. This will release it from the stack.

Alignment of the plate

The robot then places the plate on the zero table. Here the plates slide to a reference angle, so that inaccuracies of preparation are corrected and the plates can therefore always be picked up in the right way before cutting. The use of a zero table is a simple way, which saves costs for a vision system, for example.

The peelgripper would protrude too much for cutting the plate, which is why the robot switches grippers. For this setup there are two cutting grippers: one for the large and one for the small plates. Both equipped with four suction cups. The robot now places the plate on the cutting bench, where the corners are cut off. After that, the cut plate is placed on a pallet and the cycle is repeated.

Watch a video of the working robot setup and a view pictures below. 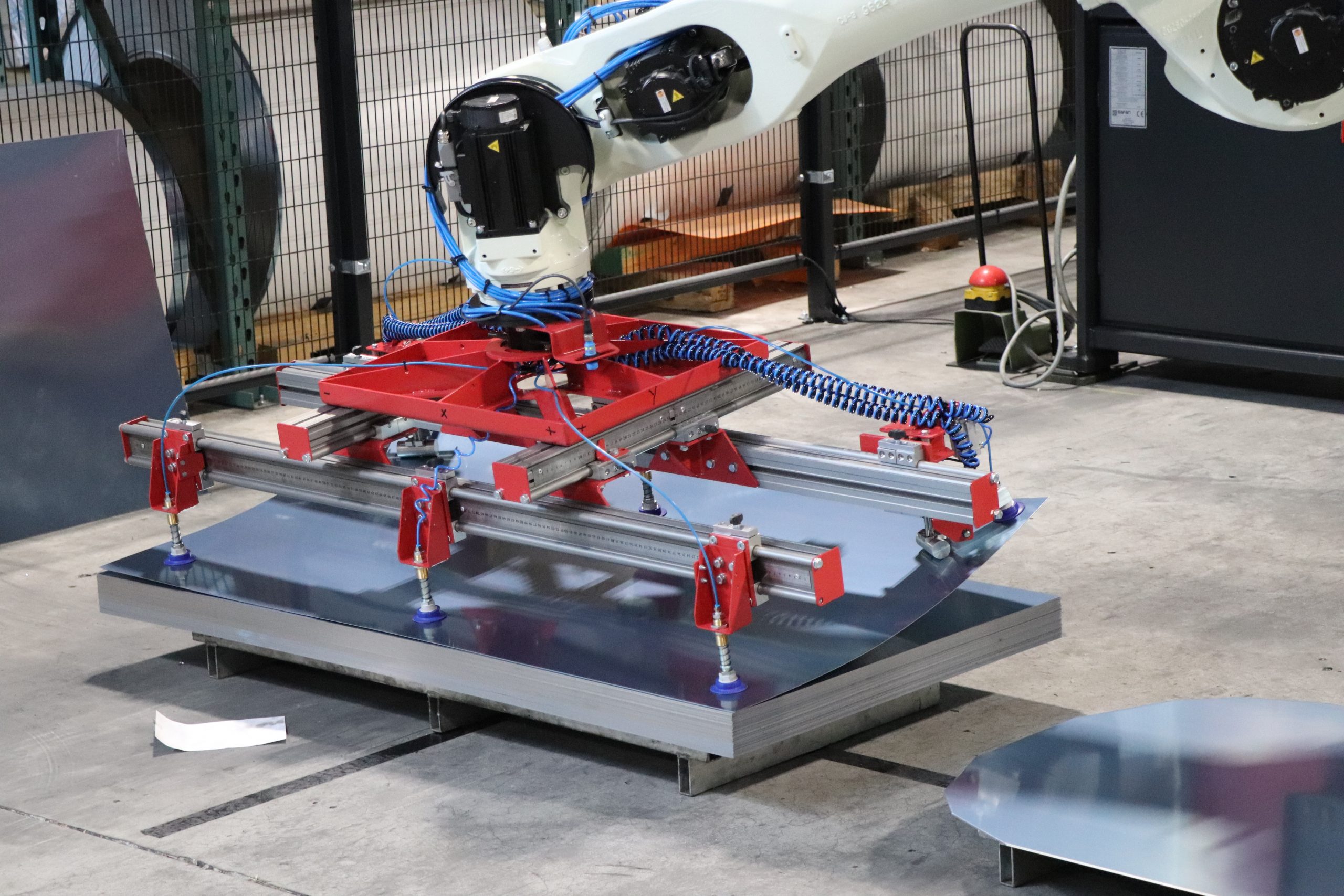 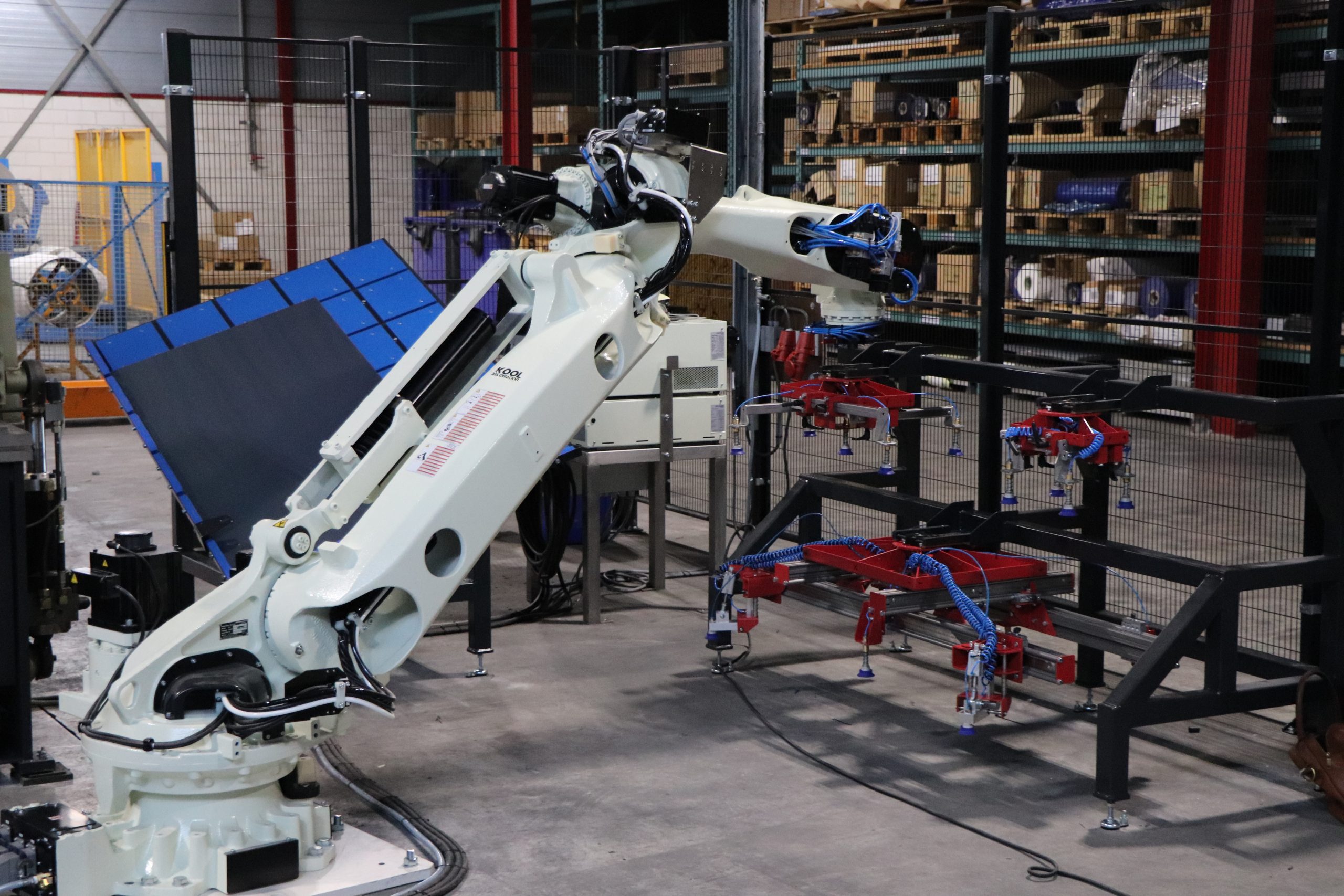 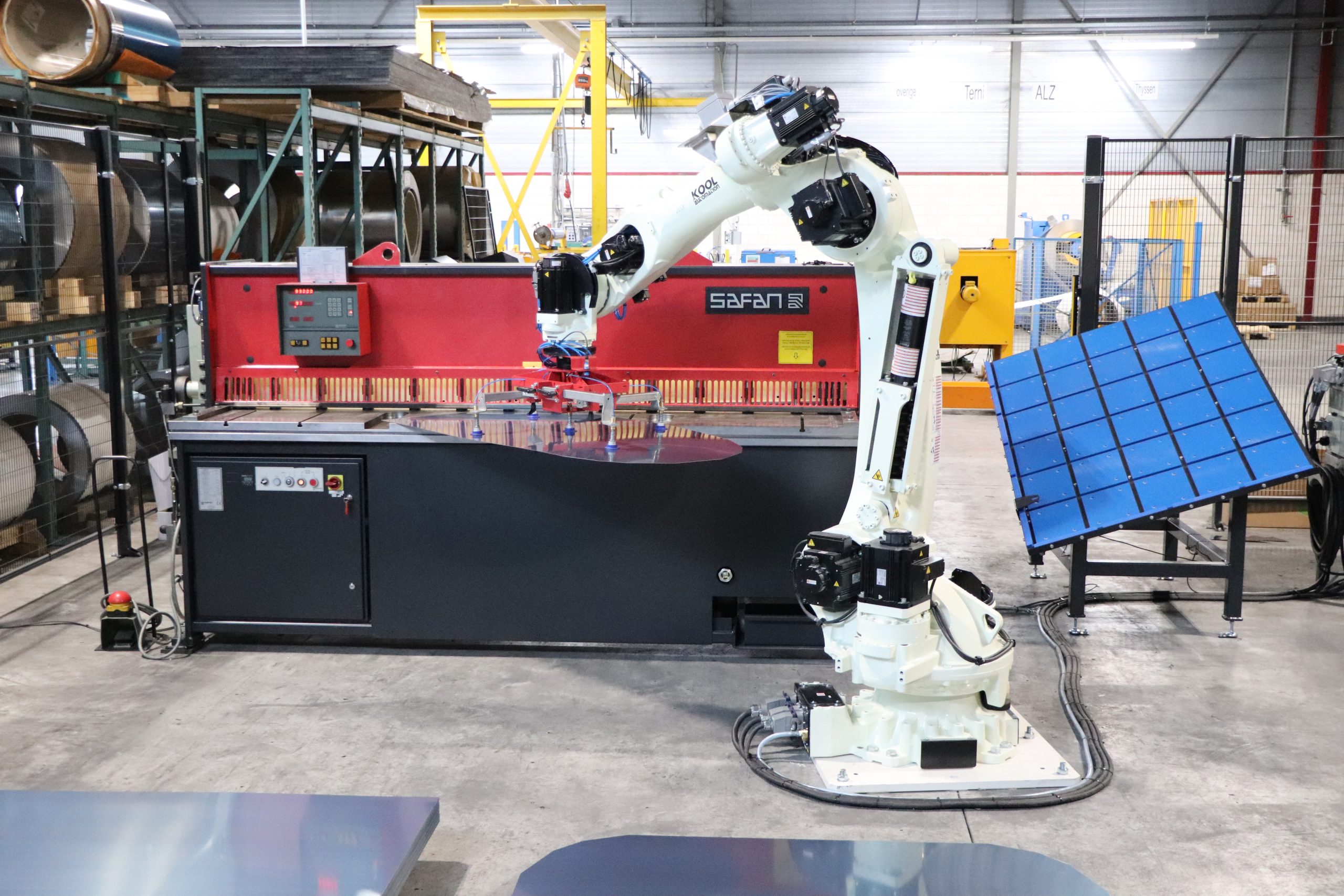 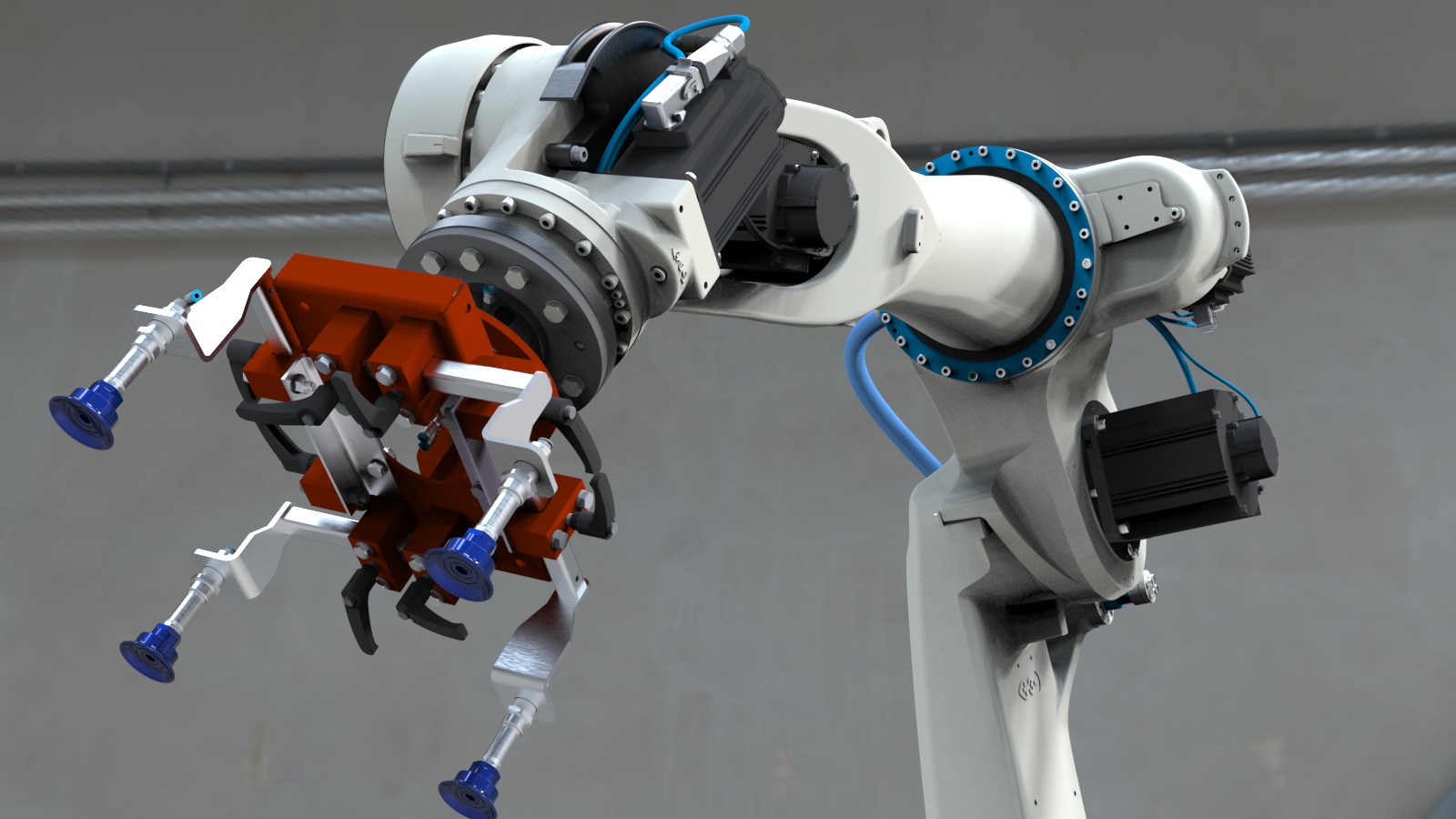 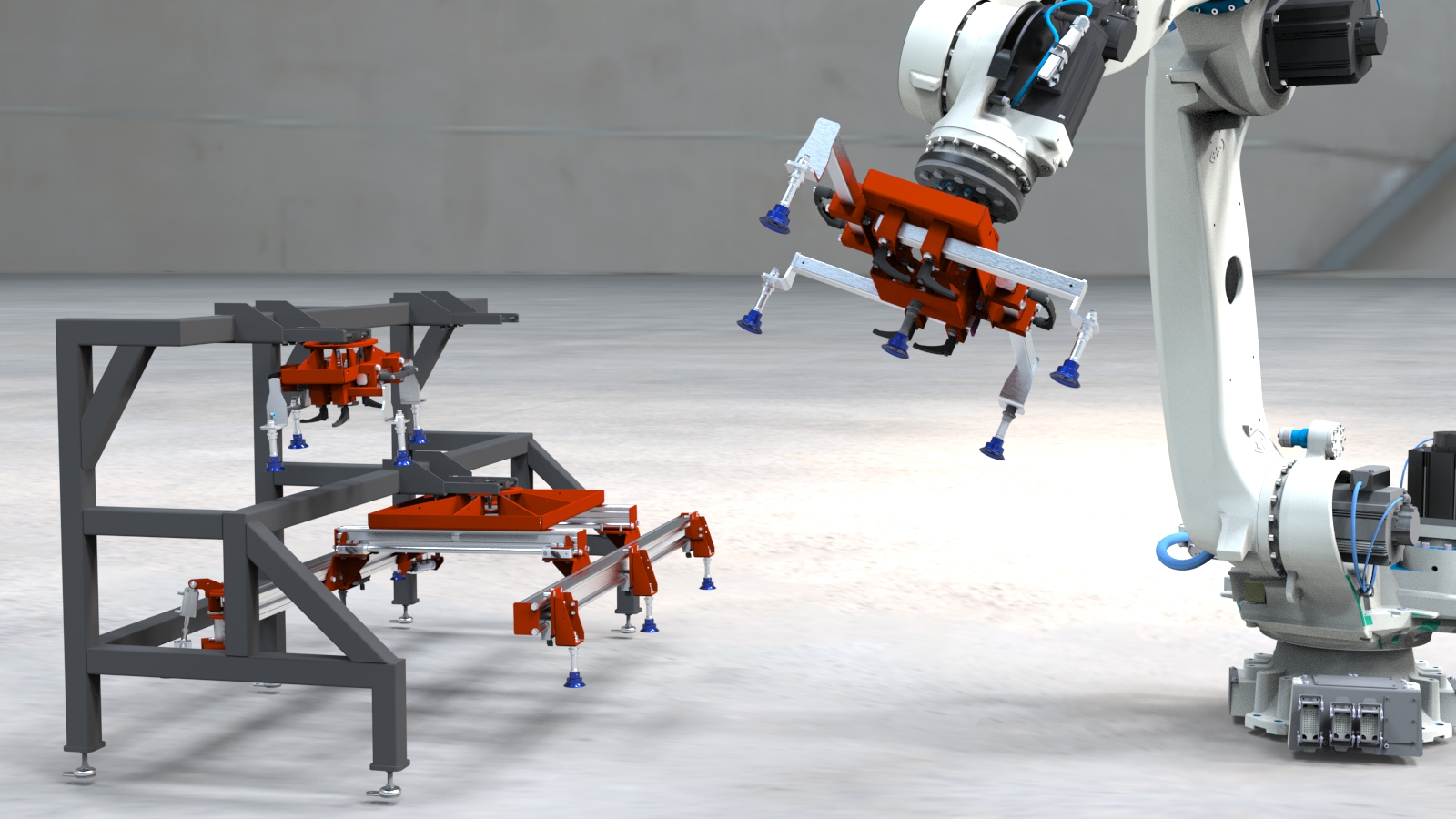 Intrested in our services?